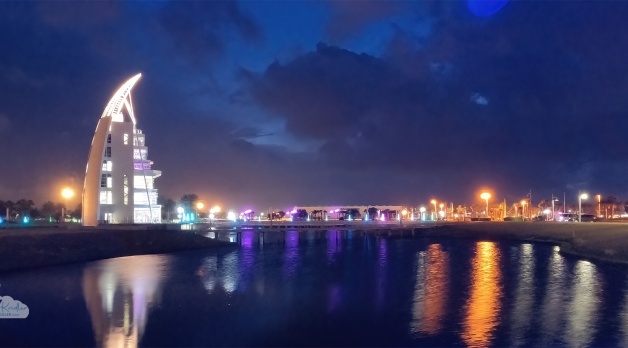 All of a sudden I’m caught in a whirlwind of preparations for storm chasing and probably leaving much earlier than I’d thought. Alethea Kontis and I will discuss our options and may be hitting the road later this week.

Work obligations have prevented me from leaving Florida so far this year. It’s always hard to miss big events like the mind-blowing Andover, Kansas, tornado, but that’s the way it works when you don’t live in Tornado Alley and can’t chase every day. And the thing a lot of people don’t understand about storm chasing is that even if you ARE out on a particular day, there’s an excellent chance you won’t see the “storm of the day.” There are a million variables, and luck plays as much of a role as skill.

A moment from the “Nightfall” timelapse.

Believe me, I could fill a book with missed opportunities and bad choices. Sometimes even when you think you’ve made a great choice, ten minutes later you see someone else’s video of the same tornado and want to cry because you weren’t in the same position. The healthiest thing to do is not worry so much about it … but we can’t help a little comparisonitis.

Anyway, I’m testing and preparing gear and sorting out equipment that hasn’t been used for some time. I’m also testing the only new purchase I allowed myself for this year’s chase – a GoPro Hero 10. This video is a timelapse filmed in “night lapse” mode with the Hero 10. I had a lot of luck with beautiful lightning night lapses like the one in this video, filmed on a Hero 8, during last year’s storm chase. I also expect to use this as a dash cam.

For now, here’s the video of night falling at Port Canaveral, Florida, with swirling clouds and the colorful lights of Exploration Tower, seen reflected in the water. I had to do a little processing to minimize noise in the image. Partly I think the noise is a product of me shooting at a more zoomed-in “narrow” view because I was shooting through a deck railing and even had to crop the video a bit in the edit. My experience with GoPros is that shooting wide and cropping in later (if necessary) produces a higher-quality image. But I still think this is a very pretty and meditative little video.

See you on the road soon!