Another day, another rocket launch from the Space Coast – only it’s never routine. Especially when you have a SpaceX Heavy launch, a beautiful twilight and the return of two boosters to Cape Canaveral Space Force Station.

Of course, someday I’d like to be super close to the booster return. I’ve seen a booster return from the Cape (and other places), but always with an obstructed view. That said, it’s pretty magical to see the separation from a little distance and witness all the mechanics of the return overhead and the boosters plummeting back to Earth. These moments really feel like science fiction. 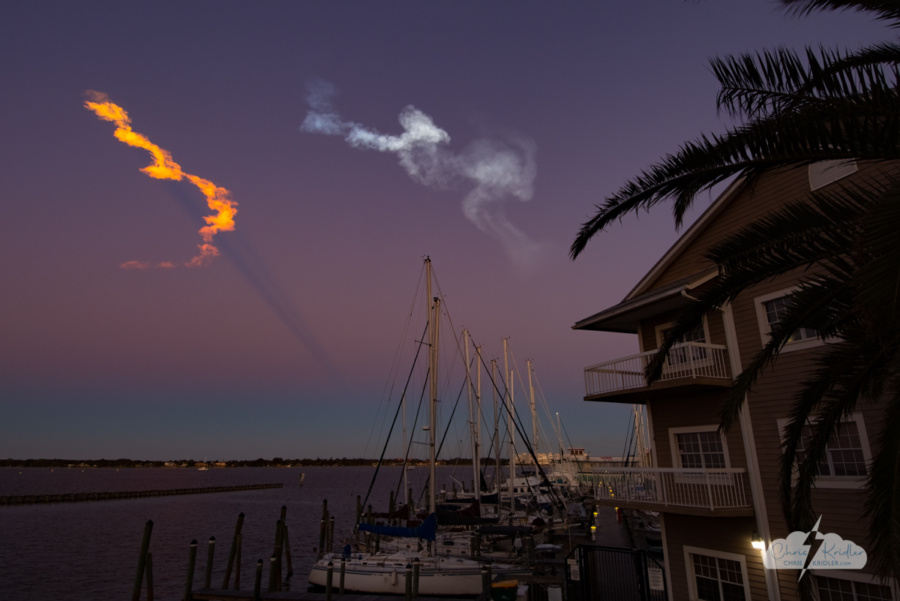 
So with all the wonder of this launch, with a Space Force payload, I’d say my photos are not technically great, but they’re interesting. The wide-angle shots are fine and caught the pretty light and arc of the contrail and “jellyfish.”

For the zoomed shots, I have a Nikon 200-500mm lens. I love it, for the most part, but it’s a challenge to focus on the fly because there isn’t just one infinity. (As my husband jokes, it’s to infinity and beyond.) So the trees far across the lagoon might be in focus, but the rocket as it lifts into the sky might be just a little “more” infinity. The lens is heavy, and while I sometimes use a tripod, handheld works better when you’re pointing up. Thus adjusting the focus to catch a zooming rocket poses an additional challenge. There’s also a haze factor at times, not to mention insane distances, but I think today my focus just wasn’t perfect.

Still, you can see the boosters separate and make their return burns in the photos, and yes, it’s still like science fiction. One of the coolest shots is a booster silhouetted, seemingly tiny, against the fiery orange of the contrail as the hardware hurtles back to Earth.

I ran two GoPros from my viewing spot in Cocoa Village, one in “Nightlapse” mode and the other in regular timelapse mode, trying to cover my bases as the light changed just after sunset. The videos were quite similar, only one was wider than the other. You can see both in the video.

Roll over any image to see a caption, or click on one to start a slide show.