The chill has lasted longer than usual this winter here in Florida, but at least we’re not experiencing snowstorm after snowstorm. What we did get was a blast of wind in a squall line Sunday, March 24. I drove out to meet it west of Cocoa. 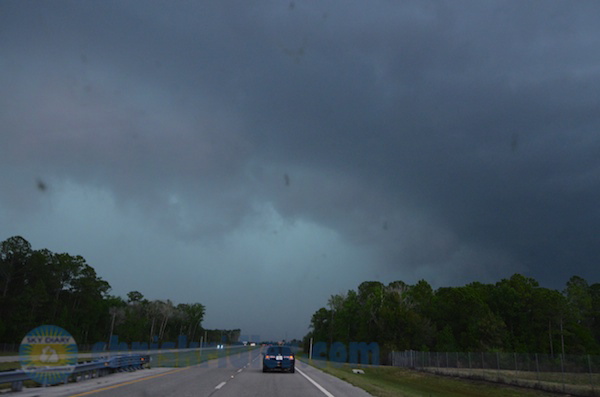 I went out to meet a squall line racing across Florida on March 24, 2013, and got a quick shot through the windshield before it overtook me. This was in the vicinity of S.R. 528 and S.R. 520, west of Cocoa, Florida.

It was moving so fast (warned with a motion of 55 mph), I couldn’t reach the area of rotation. I didn’t even have time to set up and get nice photos of the green gust front. But I did get video in my car as it blasted me.

Despite tornado warnings, the National Weather Service found only straight-line wind damage in its survey. 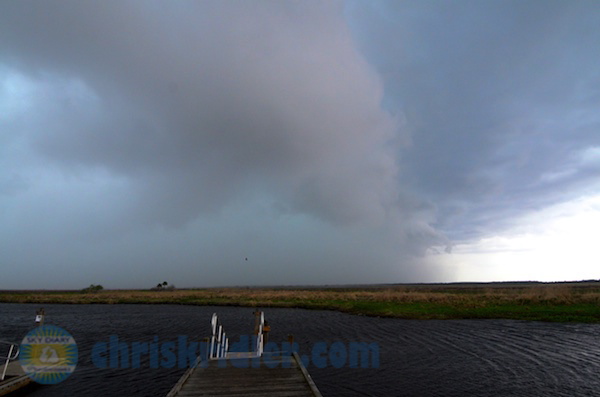 At the boat ramp across from Lone Cabbage Fish Camp, I barely had time to shoot another photo of the incoming squall line before it hit me again. At least I got a little video.

It’s not long now until the May chase! Want to see more stormy images? If you’re on Florida’s Space Coast, get a look at my storm photography on exhibit at Titusville’s Downtown Gallery, 335 S. Washington Ave. (321-268-0122), through April 16. There, you can also pick up copies of my Storm Seekers novels, Funnel Vision and Tornado Pinball – or get them online.

I’m also speaking about storm chasing and signing books at Cocoa Beach Library on April 6 at 2 p.m.  The program is free.

Late edit: Just added an event – a book signing the evening of April 6 at Coco’s during Cocoa Village’s gallery walk.