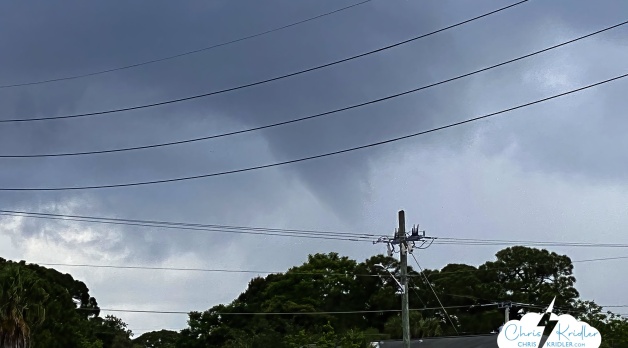 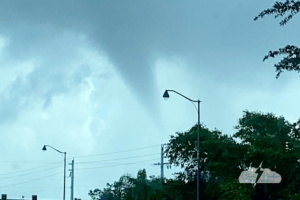 I’m literally on the eve of heading to Tornado Alley for the annual storm chasing trip, which means I dropped my Honda CR-V at the dealership for an oil change. Hubby picked me up, and I immediately saw that the fast-growing cumulus tower I’d been watching had something under it – a funnel cloud! The late, great chaser Jim Leonard always said to look for waterspouts under such clouds.

The funnel, which I first saw at 11:10 a.m., persisted, proving itself a legitimate funnel. But was it a tornado? Or perhaps a waterspout? We were in Cocoa, Florida, driving east toward the Indian River Lagoon. When we finally got through all the traffic and trees and stores to the riverbank, the funnel was in the last moments of roping out.

Later, the National Weather Service office in Melbourne confirmed they had a report of a waterspout by the 528 causeway. So it did “touch down,” but not on land. That said, it looked tornadic to me. My chaser friends say I should count it as this season’s first tornado.

Regardless of what you call it, this was a pretty rare sight for this part of Florida. It didn’t look like much on radar, but the funnel just proves that surprises happen all the time. Here’s the video.