28 May 2012: Severe Texas storms and a spectacular gust-out 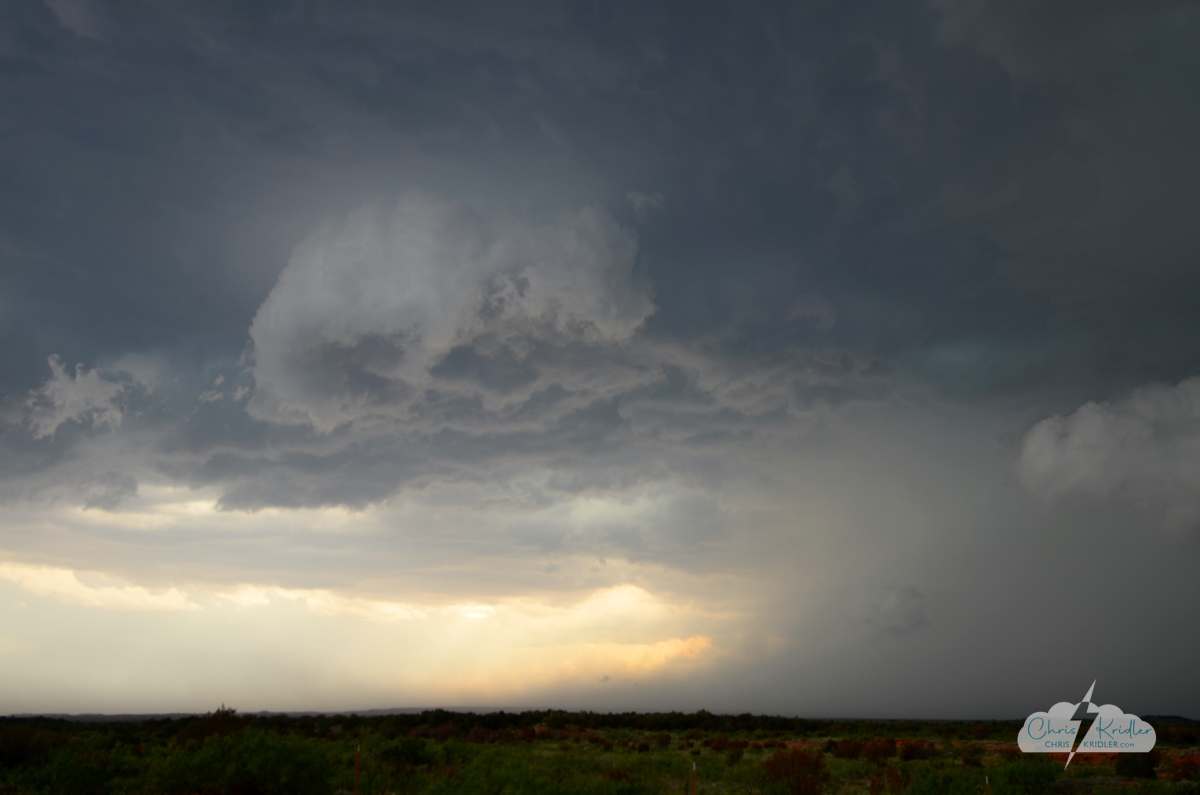 This little feature rotated, but it was high-based and on the leading edge of the outflow. Photo by Chris Kridler, SkyDiary.com, ChrisKridler.com

I chased on my own on May 28, 2012, starting from Pratt, Kansas, and aiming for just over the Texas border in the Vernon area.

I ended up under towers as they went up. They rapidly became severe.

The first one was pretty, and I let it go to navigate to the storm behind it, which looked more meaty on radar. It was beautiful but gusted out spectacularly.

I sought shelter in Seymour, but the big hail missed me. It always seems to miss me when I have protection from it.

15 May 2012: Vigorous storms in central Florida 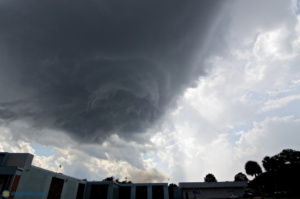 It briefly exhibited rotation. The brown smudge at the bottom of the image is smoke from a lightning fire.

Storms were vigorous and numerous on May 15, 2012, in central Florida, including Viera, Cocoa and Titusville. I saw some interesting features, including rotation on a small tower.

I also caught up to a tornado-warned storm near Titusville, but I didn’t see much except a lot of green color and vicious rain and lightning.

I’ve spent the better part of two days working on a multimedia slide show that will be played on a DVD at a memorial service. Unfortunately, the service is for a friend. I didn’t get emotional until the end of the project, when I added his name and the dates of his life. The photos are a celebration of his life, but somehow, the text made his passing more real. Tom Breen was a journalist’s journalist who traveled the world and lived a great life. He was a kind philosopher, an obsessive reporter, and a warrior for what he thought was right.

Amid the emotion and creativity, there’s also been not a little bit of technical frustration. I thought I’d share one thing I learned that might help Macheads like myself. I got a new Mac recently, running system 10.6, Snow Leopard. (What’s with the stupid cat names? Honestly, I can’t keep them straight.) I love having a new computer with lots of memory and hard drive space, but the upgraded system also means endless upgrades of software and new trials in attempting to make my old devices work with the new beast. I haven’t tried my old Nikon slide scanner yet, but from what I’ve heard, people are having mixed results. However, I learned that for my old Epson Perfection 1200 Photo, I was probably going to have to pay for scanning software. Epson’s would not install or load (though the driver did, which then had to be updated with Apple’s Software Update). Then I discovered that Apple’s Preview, which is commonly used for a quick look at photos and PDFs, actually works as scanning software, too. And it worked just fine. One hurdle gone. I get tired of waiting for iMovie to load. I prefer FCP.

I use Final Cut Pro for movie editing, but I thought I’d try iMovie for the slide show. It neatly fits your slides to a song and enables lots of interesting transitions, effects, control over timing, and titles. Unfortunately, iMovie ’11 also has its problems. It couldn’t “finalize project” because of a “heap zone” issue (documented by many but not solved in the Apple support forums). This is despite the ample memory and hard drive space on my computer. In addition, at startup, the program wants to update “Aperture Videos Event” (are there Microsoft people writing Mac software now? Is that English?) – in other words, it searches my already massive Aperture library for new stuff for several minutes. So I don’t foresee myself using iMovie all that much. I used to recommend iMovie heartily to anyone wanting to dabble in movie editing, especially because it comes free with Macs. Now, I’m not so sure. This is Chris Kridler, and I’m just starting to develop a portfolio and blog web site to complement my storm-chasing site at www.SkyDiary.com – check it out to chase the storms!