7 May 2022: Twine, trains and storms from Kansas to Nebraska 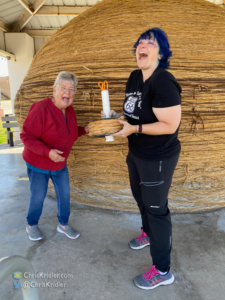 We’re making the most of the storms, such as they are. On our first real chase day of 2022, we visited the World’s Largest Ball of Sisal Twine in Cawker City, Kansas. The delightful Linda Clover, caretaker of the twine, happened to be in the pavilion in the center of town helping a pair of newlyweds add twine to this roadside landmark. So I squealed in delight because we had a chance to add twine, too!

I’ve added twine to the ball before, many years ago. So it was a thrill to do it again – even “setting the record” for a brief time. And Alethea, on her first visit, got to add twine, too. This seemed like a good omen! There’s also a delightful restored vintage gas station across the street now where you can book a night’s stay.

From there, we headed up into western Nebraska, making a stop in Sutherland. There’s a huge pedestrian walkway structure built over the many train tracks that go through here, so we climbed up and watched the clouds and hoped for a train. And we got one! I waved, and the conductor tooted the whistle, as you can see in the video.

Then we traveled on to Lake McConaughy for a pretty view of storms as they rolled over the lake. Beauty and zen and lightning – it’s all in the video. We ended the day in Ogallala, Nebraska, where the awesome UFO water tower would be a great foreground for lightning, if only the lightning had hung together. Oh, well. It was a really fun day.

Roll over an image to see its caption, or click on any photo to start a slide show.