Back when I published the Storm Seekers novels, I made book trailers for FUNNEL VISION and ZAP BANG – but not for TORNADO PINBALL. And I LOVE this book. I was crazy busy, time went by, but I couldn’t stop thinking about it, in spite of the challenges involved in teasing to a book that plays like a big-budget movie in my mind.

Well, while I don’t have a special-effects budget, I have lots of tornado footage! And while I’d love to see this book made into a film someday – because we need more good movies about storm chasers – the books and their trailers will have to suffice.

Without further ado, here is the debut of the book trailer for Book 2, TORNADO PINBALL. 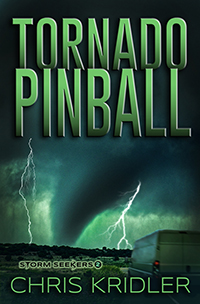