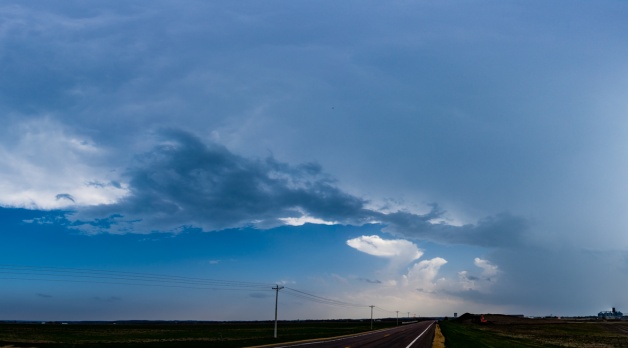 9 May 2022: Midwest madness storm chase in Iowa, Minnesota and Wisconsin 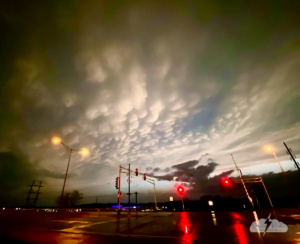 Back in Eau Claire, we caught mammatus as darkness fell. This edited phone photo looks kind of like a painting.

This year’s storm-chasing prospects were thin, at least while Alethea Kontis and I were in the Plains, so we had to follow the weather into unusual places. On this day, we started in Omaha, Nebraska, where generous friends of Alethea’s put us up for the night, and we crossed into Iowa and had lunch in Des Moines with fellow author Barbara Barrett. Only then did the chase begin.

We headed up into Minnesota first, decided not to tangle with Minneapolis, and got in the path of a fast-moving supercell near Cannon Falls. It was rotating and even had a brief lowering, but other than its abundant hail — which produced an eerie hail roar — it didn’t get its act together. And we had more problems: roads and rivers. We had to go way out of our way to cross the Mississippi River into Wisconsin, a lovely land full of trees and hills. And cheese, though I didn’t get to explore the dairyland, dang it.

We got on another tornado-warned storm that seemed unlikely to produce one and ended up in Eau Claire photographing lightning. A fun day … but a LOT of driving: 579 miles, to be exact. It was my first visit to Wisconsin, so that was kinda cool. And one of Alethea’s friends treated us to pizza at her fabulous Topper’s restaurant. Wisconsin cheese for the win!

Roll over any photo to see a caption, or click on one to start a slide show.