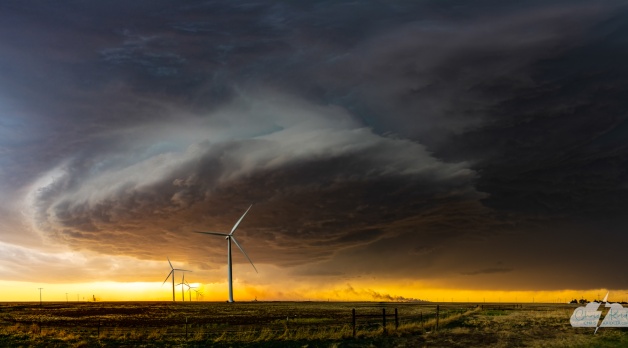 18 May 2022: Sublime supercell chase in the Texas Panhandle

We had one of the best storm chases of our trip on May 18, 2022, as we pursued a beautiful supercell through the Texas Panhandle from our starting point in Boise City, Oklahoma. We chose this starting point because we wanted to revisit Cimmy, the steel sculpture of an apatosaurus scaled to replicate a dinosaur dug up in Cimarron County.

As a bonus, there’s a 750-pound Tin Man out front. I appreciate any and all Oz references on the road. 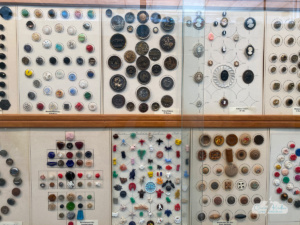 Part of the astounding button collection of Opal Cox.

For the first time, Alethea Kontis and I actually went inside the museum. One enters through what was once a unique house. The Cox House, now the Cimarron Heritage Center, was designed by Kansas architect Bruce Goff in 1949; behind it, the museum continues in a large add-on interior space and a massive backyard featuring historic structures. We didn’t have time to see it all, but since I dig mid-century architecture, I loved seeing the house.

The house’s clean mid-century sensibility is somewhat obscured by the clutter of museum artifacts now, but it’s fascinating. According to the museum’s interesting website, there are no conventional interior doors, just plastic accordion doors, and all the walls are concrete and brick, paneled in walnut.

A couple of items that caught my eye during our quick walk-through were Opal Cox’s amazing button collection and a peculiar horsehide coat; the original owner had it made from the hide of a favorite horse after it died.

Storms to the west brought us from Boise City, Oklahoma, into the northwest Texas Panhandle.

Finally, we saw a storm forming in eastern New Mexico and headed southwest into the northwest Texas Panhandle to intercept it. This remote area had plenty of prairie dogs and lonely roads, which we enjoyed on a leisurely chase, keeping level with the evolving supercell as it moved south. 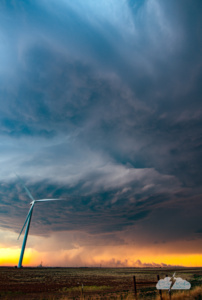 Detail of the leading edge of the supercell.

Near Vega, Texas, close to sunset, the storm was especially beautiful. Smoke from what was likely a lightning fire drifted under it as the setting sun lit the base and wind turbines churned in its path. The video alternates between music (during timelapse sequences) and natural sound because I wanted to convey the rich backdrop of wind, grinding turbines, birdsong and thunder.

Later, the storm showed some rotation, as you can see in the video, but it never got serious about going tornadic.

South of I-40, we followed the storm all the way to Hereford, though by this time, just as the structure was really getting nice, it outran us. We captured a little lightning and finally had to give up this very satisfying chase as the storm blasted us with dust in town.