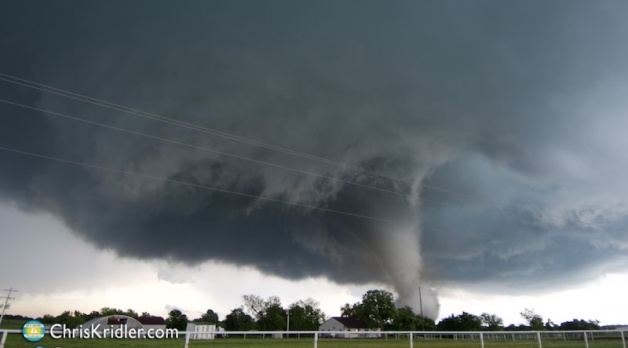 9 May 2016: A stunning chase – violent tornadoes near Elmore City, Oklahoma 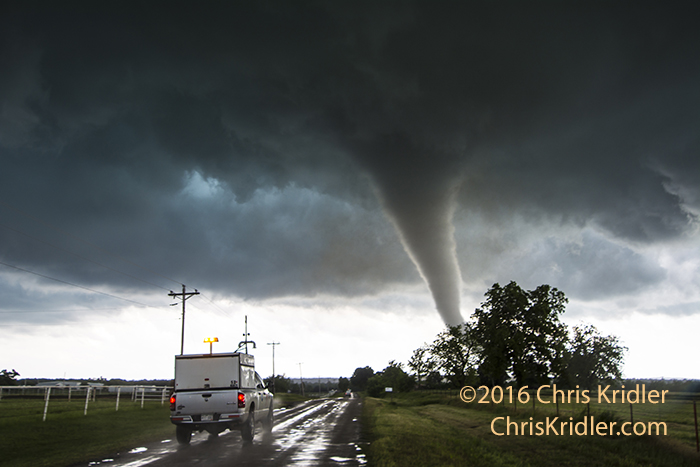 A research vehicle plunges down the road ahead of an Oklahoma tornado on May 9, 2016, to deploy scientific instruments. (c)2016 Chris Kridler

Note: This post has been updated with a gallery and information moved from the old chase log at SkyDiary.com.

I’ve had three chase days and a day “off” (to work) this Tornado Alley trip, and two of the chase days found me in front of tornadoes I could not have imagined. In fact, the first tornado I saw on Monday was the most dramatic in my 20 seasons of chasing – or at least compares to the 12 May 2004 chase in Attica, Kansas, that saw a house destroyed.

Unfortunately, several houses were damaged or destroyed by the EF4 (upgraded from EF3) tornado I saw near Elmore City, Oklahoma, on Monday, and it killed one man. A hundred feelings rushed through me as I watched the tornado get close to my location on a hill in the difficult-to-chase, tree-filled terrain of southern Oklahoma. First, I considered my escape route, because the tornado was coming my way. And then I was filled with dread as I saw the tornado approach the structures near where I was parked – even though I had no idea so many more homes were in the path. Once it started hurling debris with incredible force and speed, I felt sick, even as I was filled with wonder. This was the most stunning tornado I have ever witnessed, partly because of my proximity to it, but also because of its unusual visibility, manifest power, long duration (it was on the ground for about 25 minutes), and sheer beauty as it shifted from a multi-vortex serpent to a swirling white stovepipe wreathed in dust to an ethereal white rope. I worried it might run me over (though I had an escape route planned), but it stayed just to my south, where I had a view of its violent motion and could actually hear the tornado’s roar.

It was also a thrill to see two scientific research vehicles speed past me to plant probes in the tornado’s path. For a second, it was like a scene from one of my novels.

I hate to see tornadoes destroy people’s lives, but I am humbled to be a witness. 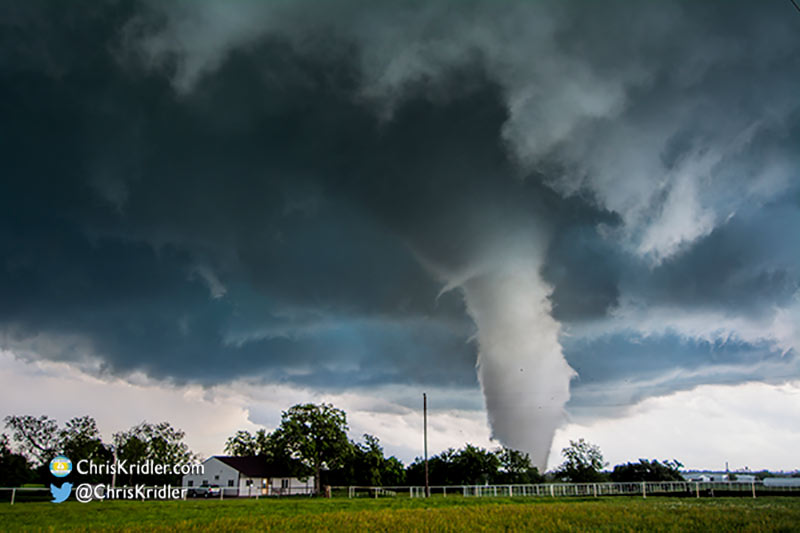 My expectations were not high when I woke up in Wichita that morning, but it was clear there would be severe weather, with the most potential – given the upper-level flow and moisture – in southeastern Oklahoma. Known not-quite-affectionately to chasers as “the jungle,” this is a very difficult area to chase, with hills and trees hindering visibility and navigation. Nonetheless, I hit the road. Though I looked at a number of forecast parameters, I was intrigued to see one little cell go up right where the HRRR model said it would. I arrived in its vicinity, near Elmore City, Oklahoma, when it was just a shower. As it grew, I observed eerie “fingers” (shear funnels, presumably) dangle briefly from the storm. Then it began to strengthen, and I dashed a bit east and south near Katie, Oklahoma, and found the top of a hill to observe the areas of rotation. One of these produced a tornado that became the most dramatic I had ever seen.

I was then late to get to the wedge tornado near Sulphur and saw it only from a distance. But I did see a pretty white tornado form near Connerville out of a negligible storm. Overall, it was an amazing day.

These photos for the most part reflect early edits from the original report at my old Sky Diary site. Roll over each image to see the caption, or click on one to see a slide show with larger photos. Later, more refined edits can be seen in my galleries (prints available).