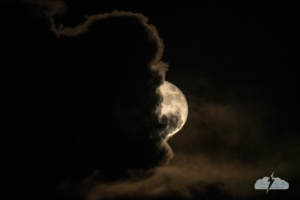 What a marvelous night of magical sights! The evening of July 14 started with a SpaceX Falcon 9 rocket launch from Cape Canaveral Space Force Station, where our little band watched the twilight show. Dawn and twilight launches are the best chance to see the “jellyfish” as the sun lights up the dramatic cloud features created by the rocket’s journey.

After the launch, Alethea Kontis and I went to the shore of the Indian River Lagoon in Rockledge, Florida, to shoot photos of a line of lightning storms offshore – and the magnificent moon rising above them. Not captured here is the bioluminescence in the river, as every little movement by fish and other creatures left trails of glowing blue behind like underwater fireworks.

The pictures and videos tell the story best. I’ve stayed up too late putting these together, so I’ll let them speak for themselves. Roll over a photo to see a caption, or click on any image to start a slide show.