7 May 2016: Beautiful tornadoes at Wray, Colorado 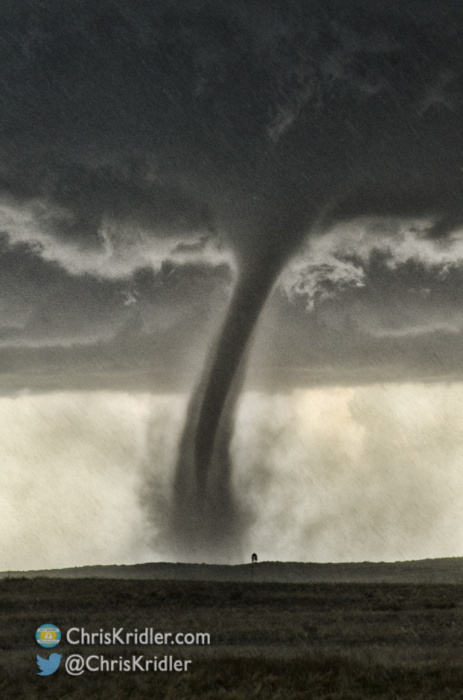 A later edit of this photo of the Wray tornado clearly shows the dusty base and falling rain.

I headed out to the Plains on the early side in 2016, as I saw storm possibilities and didn’t want to wait a week. (Living in Florida, I have to ration my chasecations.) I was hoping for the much-vaunted Colorado magic to happen today – May 7, 2016 – and indeed it did. I targeted the area with the best moisture (it doesn’t take much at this altitude) and most backed winds, at least according to model forecasts.

Lots of convection fired early and often, but I still hoped for a quality storm to get going in that area, and it finally did. By that point in the chase, I’d met up with Jason Persoff, and at Wray, Colorado, we witnessed a beautiful, dusty tornado from funnel to stovepipe.

Later, I had some regrets when I saw how close people got to the gorgeous base of the tornado on the sunlit side, but we had a fantastic show and the dramatic photos to prove it.

The photos in the gallery below, transferred from my old Sky Diary website, reflect early, not final, edits. But the edit I did of this shot – enhancing the natural sepia-toned color and contrast of the day and evoking a vintage photograph – is one of my favorites.