My target on May 22, 2012, was initially the South/North Dakota border. Though I knew the best backed winds were farther north, I didn’t think I could get to the Canadian border in time, and I liked the forecast dryline push, among other factors. 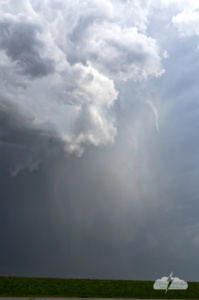 Here’s another look at the tiny funnel, which persisted for a couple of minutes. Photo by Chris Kridler, SkyDiary.com, ChrisKridler.com

However, I thought the grunge would inhibit convection, so I dropped south.

In all, it was a smorgasbord of mostly weak storms, though friends and I saw a skinny shear funnel spinning out of the back of a dying storm.

Amid all this, an unlucky pheasant hurtled at my car and snapped off my CB antenna. (See Daniel Shaw’s video, above.)