This page talks about how tornadoes form, how twisters are measured, tornado safety and more.

TOPICS: what causes a tornado? | measuring tornadoes | tornado safety | what if you’re in your car? | tornado links 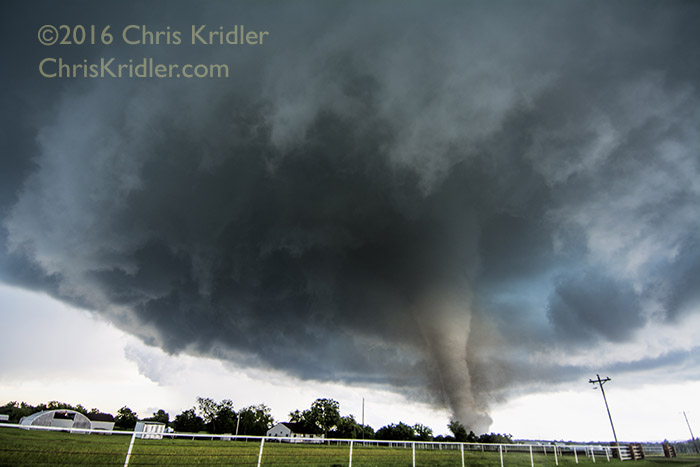 The entire structure of the mesocyclone, or area of rotation in the supercell, is visible above this tornado on May 9, 2016, in Oklahoma. (c)2016 Chris Kridler


What causes a tornado?

A tornado isn’t likely to take you to Munchkinland, as it did in “The Wizard of Oz,” but a strong one can destroy buildings and create a damage path more than a mile wide. Its wind speeds can top 300 miles per hour.

Tornadoes occur just about everywhere in the world, from India to Australia, and all over the United States, but the most famous and active breeding ground for tornadoes is Tornado Alley. It extends from Texas up through Oklahoma, Kansas and Nebraska to the Dakotas. Warm, moist air from the Gulf of Mexico clashes with cold air from the north and fuels storms that form there. Tornadoes can form any time of year, but many occur in the stormy spring, when these warm and cold air masses collide. Storms often are triggered where two different kinds of air masses meet, such as dry and moist air masses, or cold and warm air masses.

We don’t know all the reasons a tornado forms, but scientists have a good idea of the weather ingredients that need to come together. 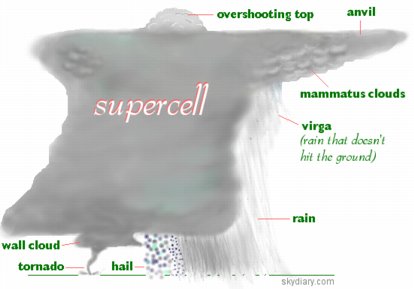 Tornadoes can form out of many kinds of storms, but the type most likely to produce tornadoes is the supercell. A supercell has an area of rotation within the storm called a mesocyclone that can spawn a tornado. The storm itself can rotate when winds at different levels of the atmosphere come from different directions. If the winds are lined up just right, with just enough strength, the storm turns like a top. Air circulations within the storm combined with a strong updraft contribute to tornado formation.

Under the rain-free base of a supercell, look for a wall cloud to form. Out of this lowered area is where you are likely to see a tornado. But if you ever find yourself near a storm like this, watch out. Quick tornadoes can form out of other parts of the storm, too. 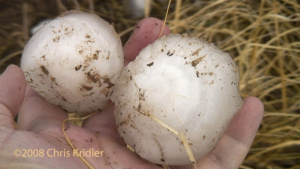 Big hail is another danger posed by supercells and other storms. You may notice what looks like a rain shaft that is very, very white falling from a storm. You may be looking at hail falling. Because hail is made of ice and is usually white, it reflects more light and can look bright as it falls. Big hail can batter cars, damage homes and injure people and animals. Hail consists of particles that gather layers of water that freeze into ice as the hailstones are cycled multiple times through a storm’s updraft. You are likely to see several layers of ice if you cut open a grapefruit-size hailstone. Just don’t get bonked in the head by one.

A tornado is only a tornado if it’s in contact with the ground. Otherwise, it’s a funnel. Some tornadoes don’t have a visible funnel, but if debris is visible at the ground, it is considered a tornado. Because big storms can suck up dust or kick up dust even when there’s no tornado, sometimes they can be confusing to observers. If there is rotation in the cloud above the dust, then it may very well be a tornado.

Most tornadoes last only 5 or 10 minutes, but some have been known to last more than an hour. Close to 1,000 tornadoes are reported every year in the United States. Most, but not all, tornadoes in the northern hemisphere spin counter-clockwise, or cyclonically. In the southern hemisphere – for instance, Australia – the opposite is true. 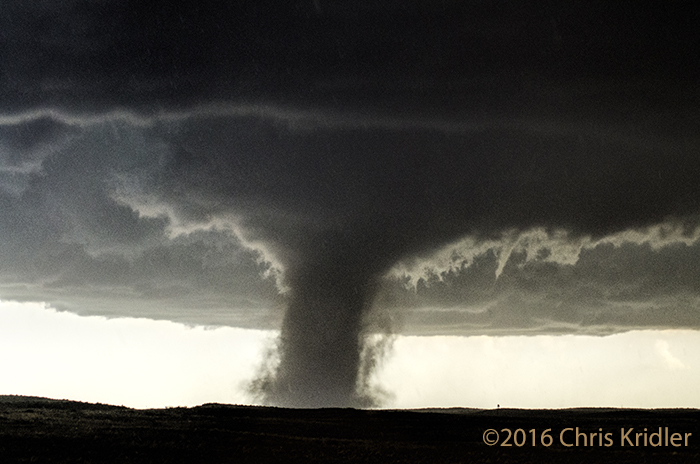 Another type of tornado is a waterspout – a tornado over water. Waterspouts often form out of quickly growing cumulus (puffy) clouds or storms. They are sometimes weaker than their land cousins, but they can still cause damage or flip boats; the strongest ones come from storms that would be producing a tornado over land. A dust devil, however, is not a tornado. If it’s a warm day, and light winds at the surface cooperate, you may see one of these whirling columns of dust in a farm field, a parking lot or the desert.

Though we can look at a tornado and see how big it is, we can’t measure its strength by sight. Instead, scientists often use the F-scale, or Fujita scale, to measure how strong tornadoes are. 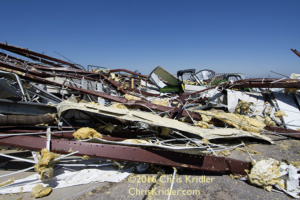 The theoretical scale conceived by the late Dr. Ted Fujita of the University of Chicago would have gone up to F12 – but anything above F5 was considered impossible. That is why the scale only goes up to 5.

The scale is a decent guideline to help us classify tornadoes, but it hasn’t always been useful. Because ratings on the scale are determined by damage to structures, a tornado that rips through a field will not get much of a rating, no matter how big it is. Now that mobile research radars are more common, their readings of wind speeds are sometimes used in the rating of tornadoes.

The strongest tornadoes, such as the F5 (now EF5) that hit the Oklahoma City area on May 3, 1999, suggested that wind estimates were too high in the scale, according to the National Weather Service. Effective Feb. 1, 2007, meteorologists began to use a new, enhanced Fujita scale. Ratings are determined with 28 damage indicators, which apply to structures from barns to shopping malls. Read more about the new scale here.

Only about 1 percent of all tornadoes have fallen into the most violent categories – EF4 or EF5. But even a weak tornado can turn over your car or damage a mobile home. That’s why it’s important to seek shelter in a sturdy structure when a tornado is approaching. 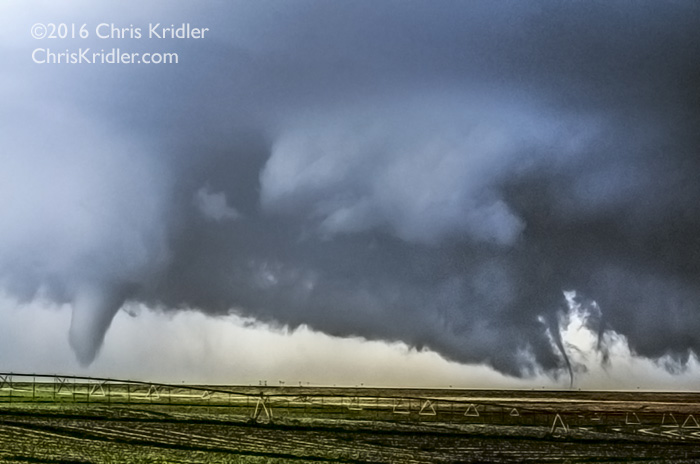 Have you heard the expression “forewarned is forearmed”? It means that if you know what’s coming, you can prepare yourself for it. The best way to know if a tornado is coming is to listen to radio and television reports of tornado watches and warnings.

The best source of all is NOAA Weather Radio, which broadcasts continuous National Weather Service forecasts and, if there is severe weather, warnings. A good NOAA Weather Radio has an alert feature that will go off like an alarm clock whenever a warning is issued. You can get these radios at many big retail stores or at specialty stores, such as Midland USA or Amazon

Also consider getting a weather warning app for your smartphone or mobile device.

If a tornado watch is issued for your area, that means conditions are favorable for the formation of tornadoes. If a tornado warning is issued, that means that a tornado has been spotted or that radar is showing a possible tornado forming in a storm. Take the warning seriously! Don’t bother to open windows to “equalize the pressure.” That’s a harmful myth that will lead to a bunch of rain and wind in your house.

Find shelter immediately on the lowest floor of your home in an interior room. Basements or cellars are best, but if you don’t have one, go to a closet or a bathroom, a small room without windows. If you can, cover yourself up with blankets or a mattress. Also try to take your radio with you so you can hear where the storm is and if the danger is over. In public buildings, try to find a sheltered area away from windows. A small room is best. If you’re in a trailer home, get out and try to find a solidly built building or tornado shelter to hide in.

The chance of a tornado hitting you is very small, but you have to act fast if you hear a warning. You may have only a few minutes to find shelter. It’s a good idea for your family to have a practice tornado drill once a year so you know exactly what to do.

What if you’re in your car?

It’s hard to know what to do if you hear a tornado warning and you are in your car. The best thing to do is try to find solid shelter, such as a well-built building. Park your car off the road so that traffic can get through, and get inside the shelter.

Do not stand outside and look at the tornado. They can move quickly toward you, and lightning is a danger, too. It’s also dangerous to stay in your car if a tornado is close to you. It will offer you no protection. Again, look for solid shelter.

It is also dangerous to hide under a highway overpass. A famous video of a tornado made a lot of people think that was a safe thing to do, but most overpasses will not offer you protection. The people in the video were not hit directly by the tornado. In fact, debris hurtling at 200 or 300 miles per hour could hit you while you are under the bridge, or a tornado could blow you out! Tragic deaths occurred in the May 3, 1999, tornadoes around Oklahoma City because people tried to hide under overpasses. In addition, when everyone parks under an overpass, traffic is blocked, leaving some people helpless and stuck in their cars in the path of a tornado.

Common advice is to get into a ditch and cover your head. If that is all that is available to you, then do it. If you have no shelter, the excellent Storm Prediction Center tornado safety tips suggest lying flat, face-down in a low area and away from cars and trees, which a tornado could throw on top of you. Nonetheless, a ditch offers little protection. If the tornado is still far away and you are already in your car, it is better to drive away at right angles to the tornado’s motion, if traffic is light, and find shelter in a building if you can. However, you should never consider driving away from a tornado as your primary plan. Especially in a populated area, you are likely to get stuck in a traffic jam, and then you will have no shelter from an approaching tornado.

If you’re caught in your car as the tornado or flying debris strikes, park outside the traffic lanes, keep your seat belt on, cover your head – preferably with a coat, blanket or other protection – and duck down below the windows.

If a tornado looks as if it’s standing still and just getting bigger, it’s probably headed right for you. You have to take shelter or get out of its way. There’s no arguing with a tornado.

This all probably sounds pretty scary, but don’t worry too much. Tornadoes are rare events. Just keep your wits about you and always look for a sturdy shelter if you hear a tornado warning or see one coming. Most important, have a plan in place well in advance for where you will go if there is a tornado warning.

Video of a successful chase of tornadoes in Kansas on May 18, 2013:

Learn more about tornadoes at these sites: