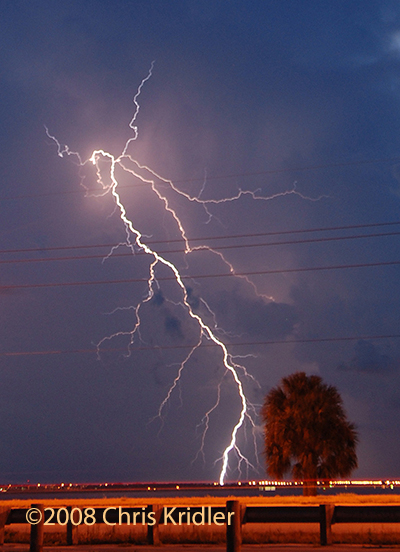 Lightning bolts consist of many branches, or leaders, and not all touch the ground. (c)2008 Chris Kridler

Lightning is one of the most unpredictable forces of nature. It can strike from minor or major storms and can hit a target 10 or even 25 miles away from the parent cloud. There’s no way to see it coming, because it happens so fast, and scientists are still trying to understand how it works.

The most commonly accepted theory of how lightning forms is that, when ice and water particles collide in a cloud, they are charged. Lighter particles tend to be positively charged and end up near the top of the cloud, while negatively charged particles are near the bottom of the cloud. (Sometimes storms have inverted polarity, and some research has found there can be several layers with different electric charges in a cloud, but all that’s too complicated to get into here!) 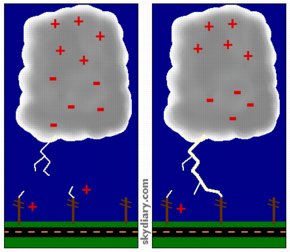 In a typical storm, rain and ice particles collide, separating charge in the cloud. As a negative stepped leader descends from the cloud, positive charge is enhanced at the ground.
In the second image, the ground streamer and descending bolt connect and “complete the circuit.” Return stroke, from ground to cloud in less than 100 microseconds, is the bright bolt seen by the eye.

So … in your typical storm cloud, the negative charge at the bottom of the cloud enhances the positive charge at the ground. The cloud wants to “complete the circuit” and sends out a stepped leader toward the ground. That further enhances the positive charge near the ground, and objects may form a streamer of positive charge that reaches up, trying to make the connection. In less than a second, the process is complete: The stepped leader from the cloud makes the connection, and a return stroke from the ground, which we see with the naked eye, flashes brightly as it channels the charge to the cloud. Multiple discharges through the same channel make the lightning seem to flicker. Woe to the object that serves as a focal point for this lightning discharge, which moves at 60,000 miles per second!

Leaders from the cloud can take many steps to reach the ground – as many as 10,000. Each bolt has the potential to be as strong as a billion volts with temperatures as high as 54,000 degrees Fahrenheit, the National Aeronautics and Space Administration says.

Because a lightning bolt is so hot, it superheats the air around it. The air particles quickly expand and contract, so fast that they break the speed of sound and create sound waves – that is, thunder. If you want to know how far away a storm is, count the seconds between a lightning flash and the sound of thunder (light travels faster than sound). If you count to 5 between flash and thunderclap, the storm is a mile away. Add a mile for every 5 seconds after that.

There’s a popular saying, “Lightning never strikes twice.” But in fact, it does, and often more than twice. Tall objects are especially prone to repeated lightning strikes. 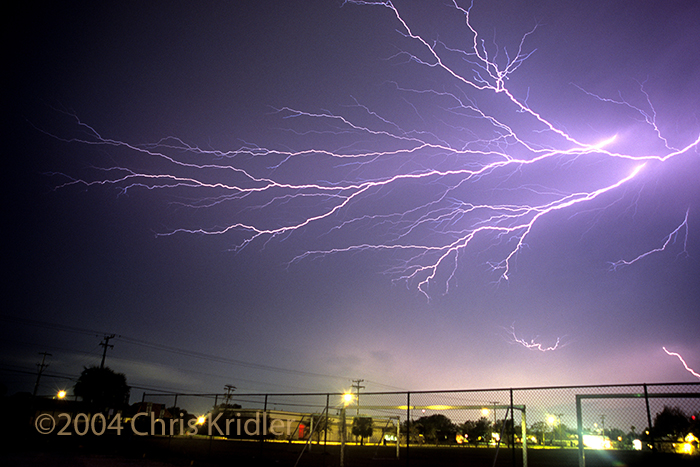 This kind of lightning is called an anvil crawler because it crawls across the sky, or across the anvil of a storm. Crawlers are often seen as a storm is losing its power, but the lightning is just as dangerous if it hits the ground. (c)2004 Chris Kridler

Of course, not all lightning hits the ground. Cloud-to-ground lightning, or CG lightning, is only one type and makes up about 10 percent of all lightning. Some lightning goes cloud-to-cloud, and other lightning occurs within the cloud. There’s also very special, rarely seen lightning called red sprites and blue jets. Sprites are wide, weak flashes above a thunderstorm. Jets are narrower and shoot out of the tops of thunderstorms. Both are very hard for the naked eye to see. (See links at the bottom of the page to learn more.)

You may have heard some people talk about “heat lighting,” flashes seen in the sky on a hot summer night. But really, there’s no such thing. If you’re seeing lightning but not hearing thunder, it’s coming from a faraway storm. At any moment, more than 2,000 thunderstorms are occurring all over the world, so you shouldn’t be too surprised to see them regularly!

To stay safe in a lightning storm, you can’t be outside. Open shelters, such as a picnic pavilion, offer no protection. Don’t stand under trees or any other tall objects, as these tend to attract lightning. Golfing, swimming, fishing or playing on an athletic field are very dangerous activities in a thunderstorm. If you’re caught in the open, the best thing you can do is crouch down and curl up as small as you can, poised on the balls of your feet.

A building is the best protection. A car with a metal roof, however, also offers very good protection – not because of the tires, but because the metal frame of the car diverts the charge away from the people inside. Just don’t touch anything metal that leads to the outside of the car. 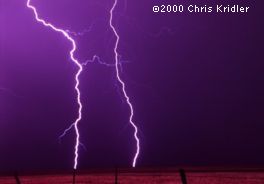 See the wire fence in the foreground of this lightning photo? Electric charge can travel along such a fence if lightning hits it, and because it sticks out of the ground, it’s a good lightning target. Avoid standing near a wire fence during a lightning storm. (c)2000 Chris Kridler

Some people are killed by lightning – almost a hundred in the United States each year. Many more people survive than die from a lightning strike, but that’s not the end of the story. People who survive are lucky to be alive but are unlucky, too, because they often have severe or debilitating injuries that can last for a lifetime. Florida has the most combined injuries and deaths of all the states. Some people call a section of central Florida “Lightning Alley” because it has more strikes than anywhere in the United States.

So how do you stay safe? Experts recommend the “30/30 Rule.” As soon as you see lightning, count the seconds until you hear thunder. If the number is 30 seconds or less, seek shelter. Stay under cover until 30 minutes after the last audible thunder or visible lightning flash. More than half of all lightning deaths happen after a storm has gone by, the National Weather Service says.

If you feel your hair standing on end, lightning may be about to strike. Crouch immediately or, if a building or car is nearby, jump into it.

Even inside a building, you have to be careful. Stay away from doors and windows. Phone lines, power lines and plumbing can conduct the electrical charge of a lightning bolt into the house, so stay off corded phones and don’t take a shower or bath during a lightning storm. It’s not a bad idea to stay away from your television, either, which has an antenna or cable leading to the outside.

Learn more about lightning at these sites: