This page talks about how hurricanes form, hurricane ratings and names, and storm safety. 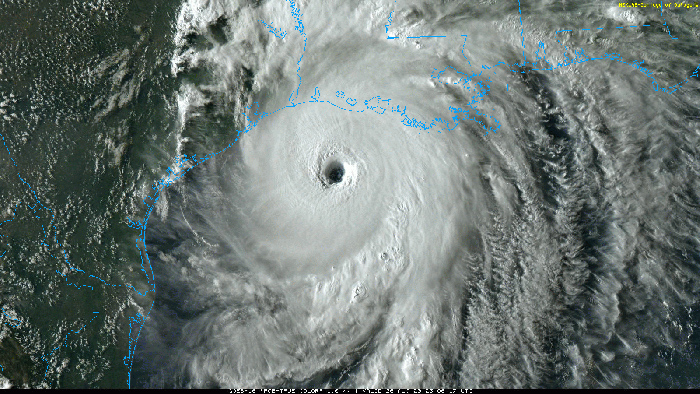 How do hurricanes form?

Hurricanes are mind-boggling in their size and strength. Modern technology lets us see how big hurricanes are and track them through satellite imagery, while storm-penetrating aircraft measure their strength, in terms of wind speeds and atmospheric pressure. That technology gives us detailed warnings that people a century ago never had.

Hurricanes usually form in the tropical zones north and south of the equator, where warm waters offer ample fuel for storm formation. That’s where you see convection, where warm air rises and forms clusters of thunderstorms. The Coriolis effect, created by the Earth’s spinning motion, may cause this cluster of storms to rotate (counter-clockwise above the equator, or clockwise below), but the system has to be a few hundred miles from the equator for the Coriolis force to exert an effect. If the system becomes organized and strong enough, with sustained winds of 39 miles per hour, it becomes a tropical storm. At 74 miles per hour or more, it becomes a hurricane.

A hurricane can be hundreds of miles across. It’s like a big engine, with upper-level winds acting as a vent, pulling the rising warm air away from the storm. Rain bands spiral around the center of the system. Air sinks in the clear center, or eye, which can be from 5 miles to more than 100 miles across.

Because the atmospheric pressure is so low in the eye, the water rises up there in a sort of mound. This contributes to the devastating storm surge when a hurricane hits land, but most of the surge comes from winds pushing the sea water ahead of the storm, raising ocean levels by several feet.

When a hurricane hits land, it tends to weaken mostly because it has lost its source of energy – the warm ocean waters. Friction might slow down the surface wind, but it also can enhance turbulence and therefore gusts, scientists have found.

The Saffir-Simpson scale is used to classify hurricanes in the United States. It was invented by engineer Herbert Saffir and former National Hurricane Center director Robert Simpson. Here’s a summary:

Andrew (right) was classified as a fierce Category 4 storm when it hit south of Miami in 1992, but 10 years later, new wind research prompted the National Hurricane Center to upgrade Andrew to a Category 5. Compare it with the enormous size of Hurricane Floyd (left) in 1999, which was a strong Category 4 at its peak. Floyd curved north and missed Florida but brought devastating rains to the Carolinas when it made landfall as a Category 2. (Photo courtesy NOAA / National Climatic Data Center)

The United States’ worst weather disaster was the Category 4 hurricane that hit Galveston, Texas, on September 8, 1900 (subject of the fascinating book Isaac’s Storm). More than 8,000 people died when a 15-foot storm surge flooded the island, which, at that time, was less than 9 feet above sea level. Now, the sea level of the island has been raised, and a sea wall has been built to try to protect the city.

Even more strong storms have struck land in recent years, and some scientists suggest that climate change is leading to more frequent high-end hurricanes. Storm frequency is also linked to decades-long trends in shifting ocean temperatures.

At the height of hurricane season, storms can line up one after another, like these systems in 2017. (NOAA)

Meteorologists give hurricanes names, which are reused unless the storm is particularly destructive. The names used to be all women’s names, but since 1979, men’s names have been used, too. Previously, when the number of storms was bigger than the names planned for the season, Greek letters were used as a last resort. That policy changed in 2021, and extra names will be available for these super-active seasons.

The Atlantic hurricane season begins June 1 and ends November 30, with the peak months from August through October.

In different parts of the world, hurricanes are known as typhoons (west of the International Date Line) or tropical cyclones (in the Indian Ocean or near Australia).

We are fortunate to have technology now that can detect the formation of a hurricane long before one is a danger to land. Yet, despite all the data we have, we can’t predict exactly where a hurricane will go. The National Hurricane Center issues a hurricane watch 24 to 36 hours before expected landfall. Hurricane warnings are issued 24 hours in advance. Evacuation orders may be issued for long stretches of coastline. It’s not wise to ignore an evacuation order. Hurricane winds are dangerous, yes, but storm surge can be even more devastating. So the best safety measure you can take is to get out of the hurricane’s path, and to do it early. Waiting until the last moment may result in being stuck in a gigantic traffic jam, or weather conditions might have worsened so much that departure is impossible (for instance, bridges may be closed or damaged).

If you are staying in an area that could be hit by a hurricane, you need to be in a sturdy shelter. Windows should be boarded up or shuttered. Secure or bring inside loose items that are outside, such as chairs or flowerpots. Turn your refrigerator and freezer to the coldest settings so that the cold lingers as long as possible in case the electricity goes out. Make sure your car has a full tank of gas.

Experts recommend having emergency supplies on hand, including:

The Federal Emergency Management Agency has hurricane tips that include teaching everyone in the family how to turn off gas, electricity and water. Make sure you have a place to keep your pet, since emergency shelters usually will not accept pets. Also have the phone number of a family contact outside of the threatened area so that, if family members are separated, they can call the contact to share information and locate each other.

After the hurricane, dangers remain. Avoid downed power lines and be careful around debris. Turn off gas lines if you smell or hear gas, get out of the area, and report the leak to the gas company. Watch out for animals, such as snakes, that may have been moved by flood waters. Don’t ever run a generator in an enclosed space, because they can cause carbon monoxide poisoning. Families need to take pictures of damage for insurance purposes.

See more detailed tips at the FEMA page mentioned above.

Learn more about hurricanes at these sites: